Power On Australia are extremely proud supporters of Samuel Lockett, a rising Aussie junior tennis athlete who has his sights set on becoming a tennis professional for Australia in the coming years. Samuel at only 14, currently plays in the Australian Junior Tournament circuit and is climbing the rankings to now be ranked in the top 800 men in Australia.  He has already won far too many accolades to list here, as such is well on his way to achieving his goal.  Power On Australia looks forward to supporting him along the way.

The sport of tennis can be a tuff gig to get started, as it is costly and very mentally draining as it is just you out there fighting for every point (very individual) – although Sam does have a real passion and level of enjoyment for also playing tennis doubles.  With Power On Australia’s support, Sam will be able to take his tennis to the next level, without the worry of how he can get there.

Boyd Lockett, Power On Australia’s CEO said “He works so hard in pursuit of his dreams and it is so good to see him starting to reap the rewards for all his effort applied. POWER ON Samuel – we are all looking forward to supporting you in your exciting future tennis career!” 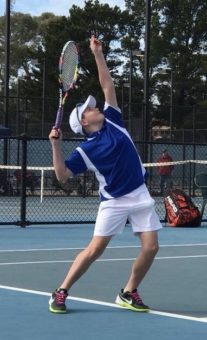 We’ll keep the power on